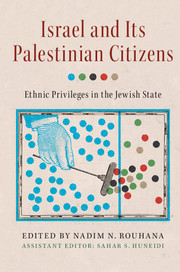 Recent developments in Israel suggest that the demise of the two-state solution may not be an end but rather a beginning, in which new links, connections and forms of struggle emerge and develop in the interaction between Palestinian citizens of Israel, Palestinians in the oPt and Palestinians in other countries. In order for this to occur, it is essential for observers to gain a fuller understanding of the role of Palestinian citizens of Israel, and in this regard the volume makes an essential contribution by examining Israel’s internal institutionalization of ethnic privileging. Arab, Israeli and U.S contributors discuss the paradoxes that arise when democratic claims are asserted in ethnic states, and also examine how the dynamics of social conflict operate in the absence of equality. The volume advances a new understanding of Israel’s approach to Palestinian citizens of the country. It also examines a broad range of areas where Jews and Arabs are institutionally differentiated along ethnic lines, including education, culture and politics, and considers the psychopolitical foundations of ethnic privilege. The volume will appeal to students and scholars who want to understand the place and role of Arab citizens within Israeli society, and who want to learn more about their collective experience as both citizens and settler-colonial subjects. Western politicians and policy-makers and members of international organizations who want to contribute to peace in the region should also read the volume, as it will help them to grasp how Israel’s institutionalised discrimination against its citizens can be considered alongside the ongoing occupation of the Palestinian territories.

This book is accessible through Cambridge University Press